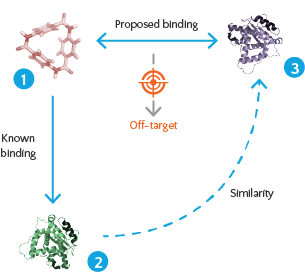 The refinement of 3D protein structure determination techniques has generated a considerable wealth of structural data stored in databases such as PDB. Taking full advantage of this knowledge, Anaxomics has developed a target-centric approach on the basis of chemical similarity between known targets and other characterized proteins.

The theoretical principle behind this methodology is simple: similar molecules tend to have similar properties and, particularly, tend to bind the same ligands. In the context of drug development, this means that if the known targets of a drug bear structural resemblance to other proteins that have previously been studied, the latter will also likely be targets.

By discovering new off-targets, a target-centric approach may be applied to characterize the safety profile of a drug or as an essential step of drug repositioning. This method reaches its full potential when used together with a systems biology analysis as a part of the integrated solution developed by Anaxomics.

You can read more about how we perform molecular docking on the corresponding White Paper.